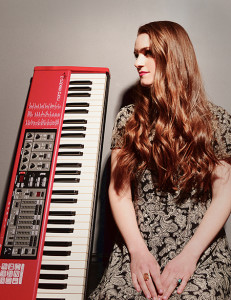 New York-based pianist, composer, arranger and educator, Caili O’Doherty, is known for integrating structures of language in both her compositions and her approach to improvisation. Her recent music focuses on the celebration, preservation, and expansion upon the achievements of jazz’s unsung women heroes.  O’Doherty holds a Bachelor of Music in performance from Berklee College of Music (BM ’13) and a Master of Music in performance from Aaron Copland School of Music at Queens College (MM ’19).  She has received national awards for piano performance and composition from the ASCAP Foundation and Downbeat Magazine.

Praised by All About Jazz for its “exquisitely forged, dramatic and darkly hued pieces”, O’Doherty’s debut release Padme (2015) uses lyrics to give the melodies a natural rhythm of language.  “Padme” means “lotus flower”, which grows from the mud and rises to bloom on the water’s surface, a metaphor for the idea that anyone, despite the conditions they start from, can hope to realize their dreams. Padme was selected as a Downbeat Magazine Editor’s pick and received a 4-star review in All About Jazz. During the summers of 2015 and 2016, O’Doherty toured the West Coast with her NYC quartet in support of Padme, performing at the Stanford Jazz Festival, Fillmore Jazz Festival, and Kuumbwa Jazz Center. CD release shows on the East Coast included the Berklee Beantown Jazz Festival, Vermont Jazz Center, and Dizzy’s Club Coca-Cola at Jazz at Lincoln Center.

“Caili O’Doherty: Celebrating Lil Hardin Armstrong” is her newest project. It debuted at Jazz at Lincoln Center’s Dizzy’s Club Coca-Cola (2018) for a weeklong residency and the Stanford Jazz Festival (2019). In December 2017, O’Doherty collaborated with saxophonist Lihi Haruvi for a two-week tour in Israel. The Davis + O’Doherty Quartet, a co-led ensemble with saxophonist Caroline Davis, toured the Midwest in Fall 2016 performing at venues throughout Ohio, Michigan, Illinois, Wisconsin, and Indiana. She joined saxophonist, Hailey Niswanger, on a three-week duo tour in China in August 2016 with performances at concert halls and theaters in Shanghai, Changsha, Nanjing, Dongying, Shenyang, Yangzhou and Dalian. In 2010, O’Doherty was one of five female jazz pianists invited to participate in the inaugural Mary Lou Williams Women in Jazz Emerging Artists Workshop held at the Kennedy Center in Washington D.C. and to perform at a showcase concert at the Mary Lou Williams Jazz Festival. In addition to numerous other festivals she performed at the UNESCO First International Jazz Day in Paris, as well as two US State Dept. supported tours to Colombia and Togo and Benin in West Africa.

Currently performing throughout NYC and touring as a bandleader and side-musician, O’Doherty also works in the education department at Jazz at Lincoln Center (JALC) as a piano accompanist for the WeBop early childhood jazz education program. She leads educational performances in New York City schools about jazz, democracy and civil rights as a bandleader for JALC’s Jazz for Young People program. O’Doherty has been a faculty member at the Stanford Jazz Workshop since 2012 and Litchfield Jazz Camp since 2015.